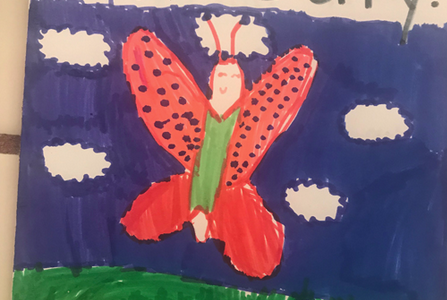 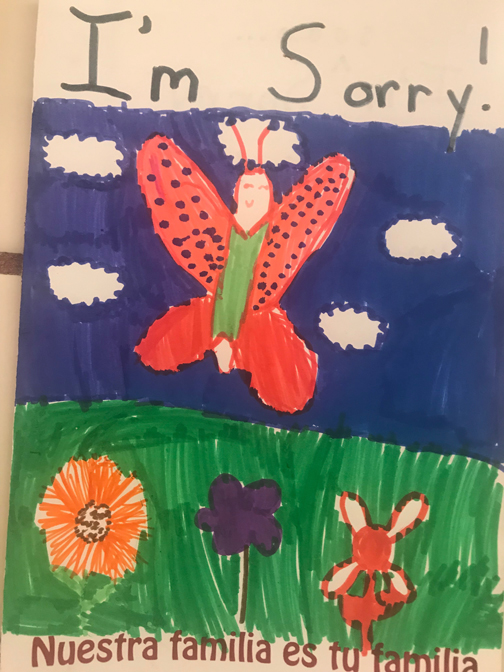 Quickly, before telling about Wednesday’s Breakfast on the Border, let me tell you about our first Family Breakfast of the summer.

Family Breakfast at High Sierra Music Festival, July 6th and 7th, was under tall pines in the eastern Sierra town of Quincy, on large picnic tables covered in brown paper, with pretty buckets of colorful markers as centerpieces.

Breakfast was oatmeal cups from Bob’s Red Mill, seriously delicious! And pancakes, flipped by expert Family Village volunteers, also from Bob’s Red Mill, sponsor of the festival. We had real maple syrup donated by Trader Joes. And hot coffee for festival parents, hero’s who both stay up late and get up early, from Fair Trade Coffee. Yummy.

It was idyllic and beautiful. What better than to have Family Breakfast with all your new friends and family? Well… the only answer: to share that love with those that can’t attend.

We took advantage of the moment, and created cards, with both personal notes and a lot of artwork for families struggling at the border. We had been hearing about these families being torn apart at the border for the month prior to the festival in the worst border policy we have known in recent history.

So, mind you, these cards were also about that… love, music, art… and hugs.  A reminder of peace. And that we all have ONE mother earth, and so we are One Family. So, our families created about 100 cards filled with magical unicorns, rainbows y mucho amor. And we collected $176 in donations—just happened to be the exact price of printing the cards.

So, post-festival, loaded up with all the extra Breakfast supplies, pancake mix, Pacific cashew milk, and coconut water, fair trade coffee, and a beautiful stack of handmade cards and made way to southern California. The High Sierra Foundation donated another $200, and so now we were confident we could do a second Breakfast– at the Border. After a meeting with Jonathan, he decided Wednesday was the only day that could work. Which just happened to be my birthday.

Tuesday night I loaded up again and went to meet Jonathan in San Diego, where he was staying with dear friends, Rita Cantu and Jay Grant.

In fact, if you are interested in border issues, an insiders non-political NYT best-seller comes from Rita’s son, Francisco Cantu. An amazing story of someone who decided to dive in head first: as a border patrol agent.  https://www.goodreads.com/book/show/34818440-the-line-becomes-a-river 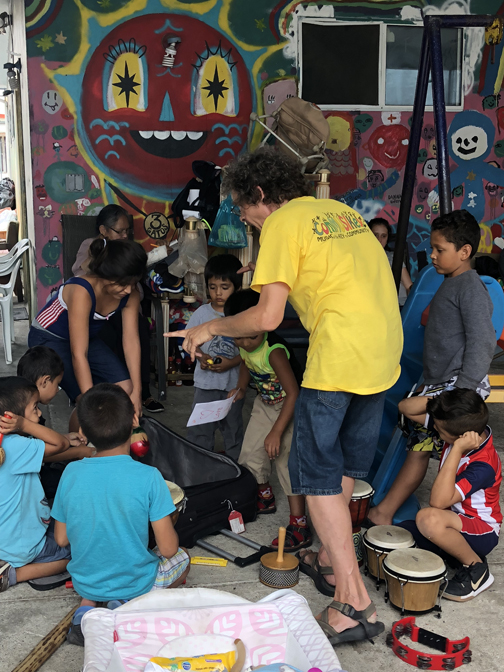 So, Jonathan Best came equipped with harmonicas, drums, whistles and little ukuleles, as this was another stop on his “Build the bridges” tour. A loose-knit tour of magical coincidences and ways to interact with people thru music and finding the thing that connects us all. To do one thing—Build Bridges.
http://www.commusikey.org/more/build-the-bridges/

Wednesday morning we made it to La Plaza de Chaparral, Tijuana, separately. Me with a carload of cereal and them crossing by foot with luggage full of music and blankets. Upon meeting up went straight to the local police under the bridge above the plaza and told them what we wanted to do… Make a Family Breakfast.

“Ok.” The police officer nodded, “It is not allowed, but ok” he said, looking us over. Me, small and with a ball cap with a big smile on it, Jay, a well-seasoned hippie, and Jonathan across the street already unloading musical instruments. “Remember”, he reminded us, “This is not allowed.”

“Just please, only 30 minutes, he began… well, 40 minutes” And then told us exactly who to trust, and directed one man, Isreal, from the sidewalk to help us. Isreal laughed and admitted he had no other plans, and dove into unloading oatmeal.

The plaza was about 100 feet from border gates and offices… tucked slightly around a corner. So, by the officer’s direction, we were told to set up in the 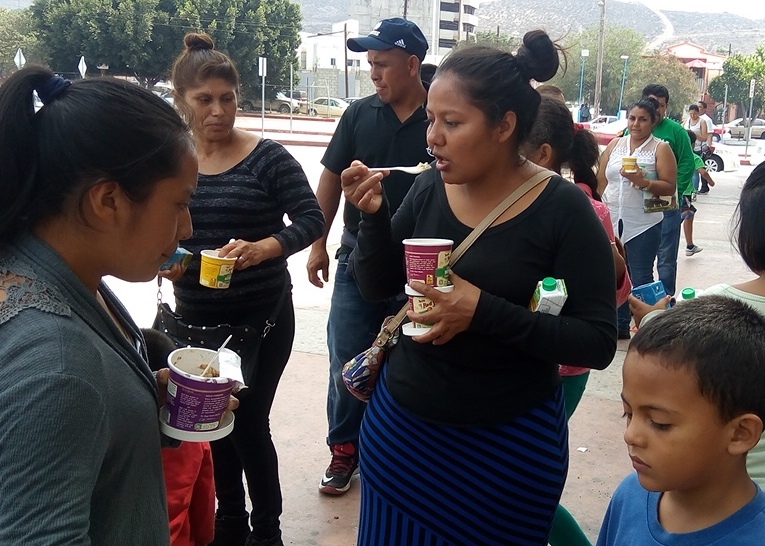 tucked in the corner. Out of sight. This was a police officer who was not going to say no to feeding these people. This in itself was so touching, as he quickly seemed to forget about time.

Jonathan had already gathered a good group of kids, who had a fantastic rhythm going, blowing harmonicas and whistles and beating little hand drums and shaking shakers of every size, while they stomped their feet in circles trying to mirror Jonathans funny dance.

The music got Jay, and our instant volunteer crew and myself going! First setting up propane griddle for pancakes, a propane stove for heating hot water, and improvised mixing station for making pancake batter. In no time a line was formed and we were serving plates of pancakes with real maple syrup and oatmeal cups to everyone.

This was a crowd that looked mostly just exhausted. Tired to the bone. Several women ate half lying down. One woman, pregnant, was grateful for the coconut water that came with a straw, as she simply couldn’t get up from her side lying position. It was clear that a two-year-old was also hers, and she had surrendered to the group to watch over her as she ran circles like any toddler would.

Some were clearly there as a family, most seemed to be alone, but no one was alone, as we were suddenly having a Family Breakfast together. And laughter was our common release and common language. You know that laugh when there is nothing else to say? And thanks to dear Isreal, the laughter did not stop.

When we gave the cards, the mothers looked at us with the biggest eyes, biting their lips. Most didn’t even try to speak, but to remind their children to say Gracias. It wasn’t complicated or even well thought out—it was just about humanity, connection, family, and breakfast. Our eyes saw each other.

After we packed up with kisses all over our cheeks about 3 hours later, and we were off to a shelter that Jonathan and Jay had begun creating a relationship with the week before. Instituto Madre Asunta. https://www.facebook.com/asuntatijuana/

This place is a beautiful shelter with the energy of Zen. As we were unloading the car a woman hobbled up to me on the rocky dirt road with blistered feet and sunburnt cheeks, trying to smile she asked “Zapatos?” I almost let out a quick “no” as oatmeal was on my mind, but right behind her trailed her two children, who had shoes. “Zapatos?” her smile fell… we made eye contact and her eyes obviously glossy from hunger.

My Teva’s fit her perfectly fine. We were instant sisters. She smiled so big, no other words. We went back to unloading. Jay said, did you just give her your shoes? Yes, I said. It was clear there wasn’t any choice. We both fought tears and kept unloading the rest of the cereal, blankets, and clothes we had.

We gave out more handmade cards here at Asunta, while Jonathan played ‘Build the Bridges, Not the Walls. The children held the cards close to their hearts and peeked into again and again. One little boy came up asking me “Fue esto hecho solo para mi?” Si. Just for you! You are never alone, One big Familia. He heard the message.

And I had a memorable birthday. 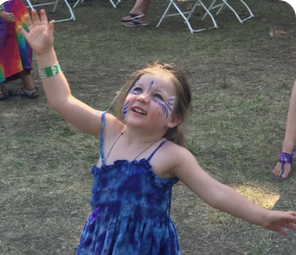 Why do you bring your kids to festivals?

Calling all Musicians, Creatives, and Dancers! 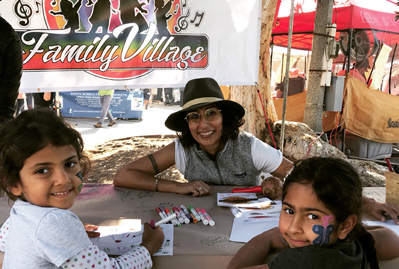 Calling all Musicians, Creatives, and Dancers!

This error message is only visible to WordPress admins

Please go to the Instagram Feed settings page to create a feed.